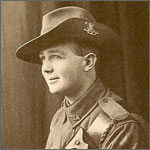 Charles Howarth Wiseheart was born on 14 September 1895 at Young, New South Wales. He was the first child of John Frederick Wiseheart and his wife, Julia Fuller. The family moved to Newcastle around 1905 where Charlie’s father found a job working in a mining company office. They lived in the suburb of Dudley, and later at Hamilton West/Adamstown. Charlie attended the Cook’s Hill Superior Public School, however, in 1909 the family moved back to Young.

On 15 January 1912 Charlie joined the Commercial Banking Company of Sydney and was posted to Woodstock, approximately 20 kilometres north-east of Cowra.

Tragedy hit the family on 21 July 1913 when Charlie’s father was run down by a motor vehicle while walking along Wombat Street, Young on his way home from work with Charlie’s uncle, Charles Fuller. John died later that night in hospital, and the bank moved Charlie back to Young so he could support his mother and sister.

Charlie turned 19 shortly after the Great War broke out in September 1914 and attempted to join the Australian Imperial Force sometime before the end of the year, but failed the medical examination. He passed a subsequent medical examination with a different doctor on 26 July 1915 and formally applied join the A.I.F. on 5 August 1915.

Charles took the oath to serve the King and the Australian Imperial Forces “until the end of the war, and for a period of a further four months thereafter” at Cootamundra on 6 September 1915. He was appointed as a Gunner to the 1st Reinforcements 5th Field Artillery Brigade A.I.F. on 4 November 1915.

On 18 November 1915 Charles sailed from Sydney on the HMAT A34 Persic, his mother and sister came up from Young to Sydney to farewell him. His sister Nellie (then aged 13 years) was quite emotional when recalling the event in a taped interview more than 80 years later:

I well remember the day he sailed the first time. I didn’t think I’d ever see my brother again. I can see them now, a lot of them straddling the railing

He arrived at Suez on 21 December 1915 and posted to the 13th Battery four days later. On 9 January 1916, Charles was admitted to the No. 2 Australian General Hospital in Cairo with a fractured skull. He related what had happened in a letter to his mother on 26 January:

I had just finished watering and feeding my horses & putting the rug on one when the horse next to it turned round & kicked me in the back of the head. I fell like a stone and was unconscious for about 20 minutes. When I came round I tried to get up but could not. Soon after that I was put on a stretcher & taken to the camp doctor, who on account of lack of instruments could do nothing. The Hospital at Maadi (in Cairo) was called up & the motor ambulance took me there. I was sent on to No. 2 General Hospital Ghizirch & put to bed. That was about 7.30 Sunday night. Up till then I wasn’t suffering any pain worth speaking about. The doctor came and examined me but didn’t know whether my skull was fractured or not. He put some instrument in my head & found it was fractured.

An operation was performed on 11 January under which the “upper portion of the bone (was) chipped away, and the depressed portion of (the) fracture (was) raised”. A drain was “passed up to (the) brain area which (was) only slightly lacerated and (the) wound was packed with gauze”.

He recovered well and a fortnight later (26 January) he was reported as “doing very well indeed” although the wound was still draining pus. In his letter to his mother on 26 January he wrote that “by the time you get this, I’ll be back at camp again” indicating that he did not expect to be repatriated to Australia.

He also said that “You’ll notice bad spelling [in the letter] but I can’t help it. I can’t think & often have to leave a space blank till I think of a word” suggesting that it was taking some time for his brain to recover from the trauma.

He was allowed out of bed for the first time on 30 January and was discharged to No. 2 Auxiliary Hospital in Cairo on 14 February where he was assessed as being totally incapacitated for six months so it was decided that he would return to Australia. He embarked on the HMT. Argyllshire on 3 March, arriving in Sydney on 30 March.

While his wound had healed, he was “still subject to headaches”, and following a medical board, Charlie was deemed incapacitated on 29 April 1916. It was recommended he receive two months pension and discharged from the AIF on 19 May 1916 “in consequence of medical unfitness” and granted a pension of £52 per annum (£1 per week) from 20 May 1916. This was amended on 1 June to £3 per fortnight (£1.10.0 per week).

Charles rejoined the Commercial Banking Company and was posted to Armidale. His pension was re-assessed in February 1917 and reduced to £1.10.0 per fortnight (15/- per week).

During July 1917 Charles decided to travel to Sydney and applied to rejoin the A.I.F. He was found to be “Fit for Active Service” by a Medical Board at Victoria Barracks, Sydney on 13 July and began his second period in the Army as a Private on 8 October 1917. He was transferred to the Artillery and appointed a Gunner on 30 October before leaving Sydney for the second time on 13 November aboard the HMT Canberra. On this trip to the Great War, he took a camera and kept a brief diary.

The Canberra took the troops to Suez from where they travelled by train to Port Said. At Port Said, they boarded another ship and sailed to Taranto in southern Italy where they entrained again and journeyed through Cerignola, Foggia, Castello Maro, Ancona, Fano, Parma, Genoa, San Remo and into France, through Menton, Monte Carlo, Nice, Les Arcs, Toulon and Marsailles.

From Marseilles, the train travelled on to Avignon, Orange, Valence, Lyon, St Germain, Tours, Mezidon, Caen and “finally to Cherbourg where we detrained at 5 pm after eight long weary days in train”.

Charlie sailed from Cherbourg at 10 pm and arrived in Southampton at 11 am the next morning – 30 January 1918. The new arrivals then went into camp near Codford, Wiltshire, just south of the Salisbury Plain. Codford was the major staging post for Australian troops going to and from France.

Charlie had eight days dis-embarkment leave from 7 March, which he used to travel to Dublin. In Dublin he met with his aunt, Annie Graham and his great aunt, Kitty Bridgford, and more than likely his great aunt, Margaret Ballantine.

He spent the next eight weeks in signals training before passing a signalling test on 16 May. He embarked for France on 17 July, arriving in Le Havre the following day. The journey to the front took two weeks by train, “motor wagon” and “on foot with packs up”. Charlie initially spent some time on duties such as carting wood and digging a dugout before 8 August – which he recorded in his diary as “The Day … first day of the War for me”.

Charlie’s diary records his experiences for the rest of the month including on 30 August: “Very narrow escape at Hem. Was using the phone when 8-inch (20 cm) shell landed about two feet (60 centimetres) from me. Luckily it was a dud. I was buried to the neck and shaken a bit”. He continued to briefly record the day-to-day action, including on Tuesday 15 October: “Late at night & early Wednesday morning, we got some gas & HE (high explosive shells). Very lively for time” and 18 October. “Out early to reconnoitre a crossing for guns. Got more gas, returned for breakfast dead tired”.

By 23 October the gas was having its effect. In his diary, Charlie notes: “Lost voice and off colour so reported sick. Evacuated as ‘Gassed’. Field Ambulance at Le Cateau.” He was sent to Rouen where on 25 October: “In morning examined by quack & told, or whispered a pitiful tale & marked ‘Blighty’ left 10 pm. Bad cough”.

He arrived back at Southampton on 26 October and was transferred to Birmingham Hospital where he was unwell for the next two weeks: “temp of 102.4ºF”; “not well – ‘flu’; “very ‘onkers’ ”; “not too good” but appeared to be getting better. On 6 November; “got up for a little while”.

Then on 11 November 1918: “When news of signing of Armistice came, great excitement. Got out of bed & went into town”.

He returned to duty at Littlemoor camp, Weymouth on 20 November and went on leave on 28 November, visiting relations in Dublin, and then on to Glasgow, Edinburgh and London returning to camp on 17 December “nearly stoney broke”. He was on leave again from 7 to 12 January 1919 before leaving Weymouth on 18 January for Devonport where he embarked on Ulysses. The ship called at Gibraltar to discharge several patients, and then again at Port Said before going through the Suez Canal to Port Suez. Charlie left Port Suez on 31 January for Colombo, Ceylon (now Sri Lanka) and then on to Fremantle, arriving on 24 February. Those not disembarking were not allowed to land in Fremantle, or in Adelaide, Melbourne and Hobart when they called at each of those ports due to quarantine regulations associated with the influenza epidemic.

Charles arrived in Sydney on 8 March 1919 and went into quarantine at North Head Quarantine Station but released a week later and “went to Goulburn & met Mother & Nellie”. He came back to Sydney on 17 March and left for Armidale on 18 March to return to his job in the Commercial Banking Company of Sydney. He married Phylis Edith Frances Arguimbau on 18 April 1923 and had two children in 1925 and 1930 respectively.

Are you related to, or think you have further details about Charles?

If so then I’d love to hear from you. Please click the link below or send an email to mail (at) wishart1418.org. Thank you.

France & Flanders 7 November 1918 Arriving in France to join the RAF headquarters in Rouen is [...]